Laser Flash - ITG in the works

Discussion of arcades and other gaming locations with music/rhythm games

wtf? he needs togo away.hes the biggest asshole ever. a friend in studyhall works at lf now, and even he says he hates working for him

Went down there again today. Didn't feel like driving to Castleton today... Anyway, it's up and running again. I must say, even though I haven't played in months, I've improved noticably in my accuracy, though my ability to read clusters of steps still isn't improving.

Not that anyone really gives a damn about this place (myself included), but I stopped by yesturday (didn't have a car to get to X-site at the time). There are a couple of things I thought should be noted here.

First off, if you had a score on the LF ITG2 machine, it's now gone. They seem to have recently wiped the high scores table. I don't think there was a single expert mode high score on the machine when I got there, and only a few on hard.


Secondly, the usb card slots on the machine are either broken, or have been disabled. Neither the first nor second player slots would recognize my card, which I've been using for ITG for a good year now.


Third, LF seems to have recently aquired a Drumscape machine. Now, having a bit of experience with Drummania, I decided to give the thing a try. Now, if you ever happen to be at LF and see this machine, don't make the same mistake I did. Just turn around and go back over to the ITG2 machine.

I was expecting a drum simulation game. However, the thing really isn't a game at all. It's really nothing more than a pay to play electric drum set hooked up to a pc jukebox. You choose a song, and then it plays the song. There's no game like elements at all in this thing. No scoring system, no patterns or instructions to follow, no nothing. You just sit in a little box (yes, the machine is enclosed) and listen to a full length, un-edited song while staring at a pc monitor that shows a static screen with the artist, song name, and a little counter thing to show you far through the song you are. The point of the thing is so that you can play along with the music, but unless you already know how to play the drums, it just makes you look like a complete moron. Once the song is over, your game ends.

Now, if you're interested in experiencing what this game is like, you can recreate the entire arcade experience at home as follows:

Step 1: place CD playing device of choice against wall.
Step 2: position a drum set directly in front of said device so that while sitting at it you will be staring at the wall.
Step 3: put in a CD, start up a track, and play along with it.

So, in three easy steps you can recreate the arcade experience at home and save your tokens for much better useage.

Oh no, not MTV Drumsc(r)ape!

Yeah, that "game" is pretty terrible for all the reasons you mention.

And since you mentioned it, I am compelled to repost this picture: 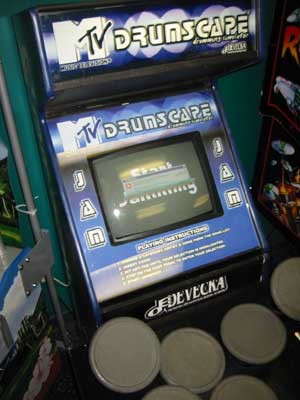 The funny thing was that the drumset was still active on that machine even though the game itself had crashed. It actually made it more fun because you didn't have to pay and it wasn't like you were missing out on any game elements. It was basically like just banging on a free drumset.

i remember playing that shit at great america...lol

Does anyone still go here? I'm celebrating a friend's birthday with some laser tag tomorrow (Monday) night, and was wondering if there's still an ITG2 machine there.
Top

It's still there. I still go there fairly often, as I live down the street from it.

I'll actually be in Bloomington most of the day tomorrow, but I should be back around 8:30-9:00. If you're still going to be there, I might stop by to stomp a few arrows.

They got rid of that. I guess nobody played it. Probably due to the fact that, well, it sucked more ass than a Namco DDR Extreme machine.

WhiteDragon wrote:They got rid of that. I guess nobody played it. Probably due to the fact that, well, it sucked more ass than a Namco DDR Extreme machine.

I'll see what I can do, Shammers, about escaping for a bit to play. The ITG2 is still there, Tokyo Drift is a racing game I actually enjoy, and the Makoto was janky anyway; there was at least one light that didn't work on each tower.

My only peeve? They STILL haven't moved/gotten rid of that loud, annoying Whack-a-Shark game next to the machine.
Top

Awesome. I have a group reservation for laser tag from 8:20 - 9:00, so any time around there I should be up for some smashy or general tomfoolery.
Top

This place is awesome. 75 cent 4 song ITG2 that happens to have r.23. Pads are in awesome shape.

These rich, white, Carmel folk aren't so bad after all. I'm looking forward to loading up my flash drive with custom songs for my next visit.
Music is a special thing because everyone is wrong on everything but it all works out in the end and we all get high as shit.

Last time I was there (couple weeks ago) for a friends bday party, the USB ports didn't work. They might now though, LF is pretty screwy
d0nt t4lk l1k3 th15 pl0x
Top

Every now and then when I stop by they aren't working. Reseting the machine usually fixes them though. Both times I've asked staff about it, they were nice about it and reset it for me. It's not that I don't know how to power cycle it myself, but rather that I think it would be rude to do so without permission.

Sunday open until 7:00 I think...
Music is a special thing because everyone is wrong on everything but it all works out in the end and we all get high as shit.